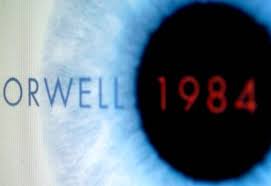 Description from back of book:

1984 has come and gone, but George Orwell’s prophetic nightmarish vision in 1949 of the world we were becoming is timelier than ever.  1984 is still the great modern classic of “negative utopia” – a startlingly original and haunting novel that creates an imaginary world that is completely convincing, from the first sentence to the last four words.  No one can deny the novel’s hold on the imaginations of whole generations, or the power of it’s admonitions – a power that seems to grow, not lessen, with the passage of time.

Why did I choose this for my 14 year old?  Because I think it’s important to give her an example of what COULD happen if the government gets too powerful.  I wanted her to think and relate this book to what might be happening in America now.  Clearly, some of it is already happening. Teenagers, today, aren’t expected to debate (at least not in our public school system) or to think outside the box.  I wanted her to stretch her imagination and talk to me about her ideas concerning the power that our government should be allowed to have.

Did it work?  I think so.  She hadn’t given ANY thought to the government or the state our country is in until she read this book and we started discussing it.

From the words of Julia, “This book scared me because it’s a weird thought to know our world COULD be like that.  I wouldn’t be able to handle not having any freedom at all.  I think it will be a long time before the government ever takes over.  Right now the government has the ability to listen in on our phone calls and there are cameras in pretty much ALL public places.  That’s kind of the same situation as in the book, just not as bad yet.”

Hmmm…  LOT’S more discussion on the topic with Julia to come.  Her innocent mind can’t grasp what’s happening all around her now.  However, I’m trying not to throw TOO many of my own opinions at her because I want her to form her OWN opinion.  I want her to open her own mind up.

Did she like this book?  Ummm  NO!  lol  Once again I chose a book NOT to her liking 😦  In her words, “I didn’t really enjoy this book because it wasn’t exciting until the end when Winston was arrested”.  Ahhhhh… the mind of a teenage, carefree girl!  She lives for romance and excitement, kind of like her mother!  lol  Oh, almost forgot to tell you that this one cost me $10!  lol  It’s a price I’m happy to pay if it helps her to use her brain 😉