It’s still snowy and kind of yucky out.  ALTHOUGH that winter storm they tried to call a weather state of emergency?  Yeah… NOT SO MUCH!  I swear, the weather people had us prepared for the storm of the century and although it WAS more snow than St. Louis is used to having (in these past few years), the temperature rose to 37 F today and pretty much melted all that ice and snow they wanted to call the national guard about!  lol 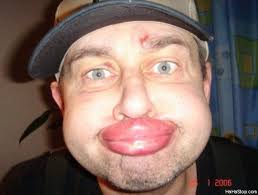 what Julia’s lips look like after Hannah brutalized her

That’s okay.  We still had fun.  Julia (teenage munchkin) and her friend went to shovel driveways for the elderly people in the “hood”.  That was a blast in itself because Hannah (friend) knocked Julia (who’s a beast so please don’t feel sorry for her) in the mouth with a shovel.  NOW my little munchkin closely resembles Angelina Jolie!  One fat and bloody lip later, they came walking through the door, cold and hungry.  BTW…  These girls are like boys.  This is the way they play.  Earlier, Julia busted Hannah in the nose and they SWORE it was broken.  WHY did she do this?  Good question.  She says it was because Hannah scared her so she tackled Hannah to make her stop.  IDK.  I don’t get it.  lol  ANYHOO…  Hannah’s mama called to ask me about it. The sad thing is that I hadn’t heard a word about a broken nose (exaggeration)!  It happened in my house, granted it was in the basement but still!  The only way I found out about it is because Hannah “texted” her mother to tell her about it!  lol  Wow, I’m still not going to get that mother of the year award, huh?  Thank GOODNESS Hannah’s mom was okay and we’ve known each other ever since the girls were 7. 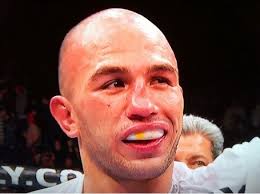 what Hannah looked like after Julia brutalized HER nose

Broken nose and busted lip deserves something special on this cold day, I think.  SOooooo…. I whipped up my favorite batch of potato soup.  Actually, this is EVERYONE’S favorite potato soup.  I have people telling me that it’s all they want for Christmas, as in for a Christmas present!  I’ve made half gallon sized mason jars full for family and friends to take home.  It’s THAT good.

Fry bacon in a Dutch oven or large soup pot until crisp.  Don’t drain bacon grease.  In the same pan, add potatoes, ham, onion, bouillon cubes and thyme.  Add just enough water to cover potatoes.  Bring mixture to a boil and then turn down heat, cover pot and simmer until potatoes are tender.  Drain potatoes in colander to remove water and return to pot.  Add cream, milk and parsley flakes to potatoes, bacon and ham.  Stir in cornstarch and water mixture for thickening.  Heat through and serve.

This is awesome with a little cheddar cheese added to your bowl!  If you don’t THINK you like potato soup, PLEASE try this one because chances are you’ll love it 🙂

I had a nice little surprise visit from my mother a few minutes ago.  Truthfully, her visits can be a little stressful for me due to her constant judgement of whatever it is that I’m doing at the moment BUT NOT this time!  THIS time, she brought cookies!  VERY tasty cookies.  Mom got the recipe from http://www.midwestliving.com/recipe/salty-caramel-and-pecan-oatmeal-cookies/ but made a few of her own adjustments.  These are too good not to share so without further ado, I bring you my mother’s oatmeal cookies!  Probably the best oatmeal cookies I’ve ever tasted and I’ve tasted PLENTY.

Now here’s a little tip from me…  ALL cookies stay soft and chewy when stored with a slice of bread in the container!  For real.  You should try it!  The bread soaks up the moisture that would otherwise make the cookies hard!
Enjoy!

Every now and then I come across something on Pinterest that works.  This is one of those times.  For dinner last night, I had some polish sausage that I needed to use.  I found this recipe on Pinterest that was taken from http://www.tasteofhome.com/Recipes/Penne-and-Smoked-Sausage.  I’ll have to admit it didn’t look as amazing as it tasted.  I doubled the recipe and between the 3 of us, more than half of it was eaten.  VERY tasty!  Of course, I added more cheese (cheddar) but other than that, I didn’t have to make any modifications.  This one’s a winner:-)  Give it a try and let me know what you think!