Here’s my courtesy call (warning) to the universe…  I will be without hormones in TWO days!  Do you know what that means?  I pity the world.  I will be racked with hot flashes and a willingness to kill or devastate anyone who has the audacity to get in my path.  For REAL. 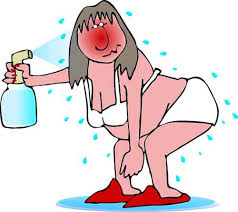 Menopause is something that shouldn’t be happening to me already.  However, due to a softball sized tumor on my ovary and some extensive damage to my uterus (9 miscarriages and 9 D & C’s plus 1 C section), it was necessary to have a hysterectomy a few years back.  My OBGYN is a man who “forgot” to mention to me the horrors of early menopause so for 2 years, I stayed somewhere between suicidal to somewhat COMPLETELY crazy.  I said and did things that where not normal for even me!  lol  I shudder to hear some of the stories that my family tells me.  Finally, one day, I thought to call my doctor who asked me if he’d put me on hormones.  “Why NO, you didn’t mention hormones, Doc”.  “Oh no, MY bad”, he says.  WTF???  I could have killed myself or someone else and he says “My bad”?  That’s it?

So he immediately put me on hormones that just barely worked but I thought it was normal.  I was a little LESS suicidal and had a few less hot flashes.  This went on for a year before I called the pharmacy who makes the hormones asking if it was normal to feel this way.  They checked the formulation that my doctor recommended and they quickly told me that this formulation couldn’t work on a MAN!  It was so weak and they should have caught it before now.  Once again, my doctor was negligent and the pharmacy had to tell him what the normal formulation should be.  Wow.

Everything seems to be okay with this prescription BUT…  Now the time is up and the pharmacy had to call the doctor to get an okay.  The good doctor won’t refill my little lifesavers.  He wants to see me in his office.  However, he didn’t call ME to tell me this, he called my HUSBAND.  Who, by the way, didn’t bother telling me until after hours and he just barely remembered to tell me THEN!

Now, you’d think the man would KNOW that his life as he knows it is over, right?  NO.  He’s completely clueless.  I asked him “what about CRAZY don’t you understand?”.  It’s going to take me 2 weeks to get in to this damn doctor and then it’s gong to take another week for the pharmacy to MAKE the prescription and get it down to the actual pharmacy that I use.  It’s a special formulation.  The BEST case scenario would be that I have my hormones in 3 weeks!!!!  Even my young 14 year old daughter AND her friends are making arrangements to vacate the primises!  What I’m trying to say is that MAYBE my husband should have reacted with a little more urgency than to even wait a day to tell me to make an appointment with my idiot doctor.

What are my hopes and dreams for these next few weeks?  First, I hope my husband has enjoyed his life, up until now.  I hope my child finds a safe place to hide.  AND my #1 wish is that by the time I see my OBGYN, I will be completely whacked out and he reaps the benefits from his decision to NOT refill my prescription!

So there’s my courtesy warning and I just want to say also that it’s been wonderful having you all for friends…  I feel the love NOW, mostly because I still have 2 little hormone pills left.  Moral of the story?  If you have a medication that life as you know it DEPENDS on, maybe you should notice when it’s going to expire and take action LONG before it becomes critical.  Once again, my oblivion and procrastination did NOT pay off.  lol