Last week, our family was bombarded with funerals.  One of the funerals took place at Jefferson Barrack’s National Cemetery.  Now, I know that attending a funeral isn’t on the “fun” list for anyone, but for me, attending a military funeral can be moving.  One of the highlights occurs after the preacher finishes his eulogy and “Taps” is performed by an ex or retired military bugler. Even if I don’t know the person being buried well, I ALWAYS, without fail, get teary eyed.  That’s okay though because when I look around, everyone else is shedding a tear or two also.  I don’t know anyone who’s so hardhearted that the sad bugler can’t evoke a tear or two.

If you’ve ever attended a military funeral or visit a National Cemetery, you know that the final resting place for a military man is lonely and a little boring in it’s “sameness”.  You won’t find different shaped tombstones or anything written on the tombstone that will give you a hint into what that person might have been like.  Actually, I used to hate visiting these cemeteries.  Now that I’m older, I can find the beauty in the “sameness” and understand what an honor it is to be buried here.

On any given day at Jefferson Barrack’s Cemetery, there may be upwards near 20 funerals.  During each and every funeral, there will be a old soldier paying respect to another soldier being laid to rest.  It cost the cemetery $25 to pay this soldier to bugle “taps”.  Apparently, it’s not cost effective to pay these men any longer. It was just publicized that now, during each and every funeral, “Taps” will be played over the loud speakers.  No more soldiers dressed in their uniforms.  No more respect for the soldier being laid to rest.  Personally, I think this is HORRIBLE and disrespectful.  Loud speakers?  Don’t bother.  For my relatives who will be laid to rest at Jefferson Barrack’s, I’ll be happy to pay, out of my own pocket, an ex military man or woman to bugle “Taps”, just the way it SHOULD be played, with respect and in person.  To be fair, the cemetery is going to allow us to purchase our own buglers through the funeral home.  Wow.  I know there will be soldiers who volunteer their services for these fallen men and women.  I just don’t think they should HAVE to volunteer.  I feel like this should be a service provided by our country to show respect for the time served.  I know I’m not alone in the way I think. 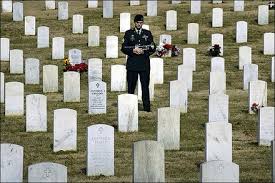 Here’s the link to the story that aired this morning.  Shame on them.