Have you ever had something stuck in your mind from a magical time of your youth?  Something that all other “like” things are measured by?  I have.  Pizza is like that for me.

When I was very little, my dad had a friend who came over from Italy to start a business in South St. Louis.  He spoke broken English and we couldn’t really understand him.  The LaFata family business was called Pizza A Go Go.  I remember my brothers and I sitting in this crowded little diner, watching Frank toss the pizza dough in the air, stretching and pulling.  Sometimes, Frank would let us try our hand at tossing the dough…. ALWAYS a disaster!  lol  There’s definitely an art to it and an art that I never DID learn how to execute properly.  In fact, as good of a baker as I think I am, I can not make good pizza crust.

Growing up in St. Louis during the 1970’s, we didn’t have pizza chains like Domino’s or Papa John’s.  I think I can remember a Pizza Hut but there was NOBODY who delivered.  SO going out as a family to our little hole in the wall, Pizza A Go Go, was an event.  We couldn’t WAIT to taste that pizza!  The sad thing is that we didn’t appreciate how wonderful our little slice of heaven really was.  We took Frank’s pizza for granted.  We thought ALL pizza tasted like Frank’s pizza. Oooooooo  SO NOT true!  My dad TRIED to tell us how good it was but we didn’t have anything to compare it to because Frank’s pizza was all we ever had!  I’d listen closely as Dad tried to convince Frank to share his recipe for his special sauce.  There were even special herbs that Frank added to the cheese.  I can still hear Franks’s loud  and thick Italian accent, as he’d shout “NAW NAW NAW (no no no), I-a-canna-not give-a- you- my-a-secret, Keeeeny (Kenny)!”  lol  God I loved that man!

Through the years, as I grew up during the 80’s and 90’s, we still had Frank’s pizza frequently.  My surviving brother and I helped run our family business and Frank brought his car in to be repaired or inspected.  I’ll never forget the last day I spent time with Frank.  He was sitting in the office talking to me in a sad voice.  Pizza A Go Go had been broken into several times and Frank was thinking of closing the doors.  The neighborhood had been taken over with crime and to top it all off, Frank had undergone open heart surgery and wasn’t feeling well.  He didn’t think his boys were interested in running the family business and Frank’s heart wasn’t in it anymore.  I could have cried.  I begged Frank to reconsider but he only looked depressed and disinterested.  I don’t remember talking to Frank anymore after that day.  I CAN tell you that I think he closed the doors on South Grand and I’m really not sure when his son, Paul, decided to reopen in a different location.  Regardless, I haven’t had authentic pizza since the 1990’s.

Now I’m grown, with grown kids of my own.  My own kids grew up with chain pizza.  The kind of pizza that’s delivered without taste and cold, more times than not.  Quality doesn’t matter and the taste closely resembles a cardboard box.  That’s what pizza is to them.  We’ve tried several types of pizza through our travels but nothing compared to Frank’s.  In fact, I’ve pretty much grown to hate the taste of pizza.  The only redeeming aspect of pizza night is the fact that I can be lazy and not cook PLUS it’s delivered straight to my door.

That is until last night.  Last night I had a HUGE craving, sort of a “body memory”, for Frank’s pepperoni.  Pizza A Go Go is located over an hour away from my house so I called my husband and asked him to go out of his way to pick some up on his way home from work.  He loves me, so he did!  lol  My poor husband battled several accidents on the interstate during Friday night rush hour only to get to the NEW Pizza A Go Go and find out that they DON’T take debit cards.  We rarely have cash and who carries checks anymore?  lol  Whatever, it was SO worth it!  He went in search for an ATM and had to wait in line for that!  I’m not sure my husband thought is was as worth it as I did but we live by the rule, “If mama aint happy, aint NOBODY happy” in my house!  lol

NOW, this is what pizza is SUPPOSED to taste like.  I’m happy to report that Paul can make a pizza JUST like his daddy!  As soon as my slice of pepperoni hit my taste buds, I melted!  Oh and, it’s even good warmed up for breakfast, just like I remembered 🙂  Thanks to the Lafata family for making this old mom VERY happy!

I went online to try and leave a review and in searching for information on Pizza A Go Go, I ran across an article fro the St. Louis Riverfront Times , where they voted this pizza the best thin crust in St. Louis!  I thought the quote was dead on, “Perfect in it’s simplicity”.  So true.  Nothing flashy, that’s for sure but there’s something about the herbs or maybe the sauce or maybe the crust that just works.  And there’s really no trying to compare.  What I’ve learned:  If I want REAL pizza, it’s worth going out of the way, even if it’s an hour but ESPECIALLY if I can send my husband to battle the traffic! 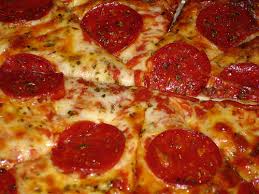